I wonder how much of Mr Gates’ worth was real-estate. :)

It is certainly a dawning of a new era. But not just because of Gates' fall. The 22nd annual rankings of the World's Billionaires reflects all sorts of upheavals in the list's makeup. Two years ago, half of the world's 20 richest were from the U.S. Now only four are. India wins bragging rights for having four among the top 10, more than any other country. 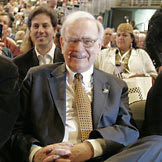 9 thoughts on “I wonder how much of Mr Gates’ worth was real-estate. :)”