Tax is mainly Interest Payments, not for the poor or sick? 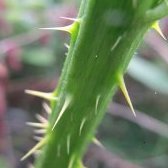