Guy I Know On Another Forum Claims He Isn't Racist 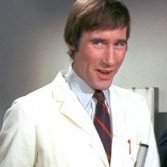