Faulty Diverter Valves On Boilers: How to Diagnose & How Much To Fix

A really common problem, especially with older combi boilers, is a faulty diverter valve. When the diverter valve decides to start playing up it causes no end of boiler and heating issues.

In this 5 minute guide we are going to run through everything diverter valve related to turn you into a mini expert, included is:

The Good News: Diverter valves can be fixed or replaced

If this is just another boiler problem, in a long line of boiler problems – stop. Throwing good money after bad, makes no sense with boilers. Especially if your boiler is an older model or out of warranty.  Doing these few hundred fixes time after time add up to well over what you pay for a new boiler right now with a deal from someone like Heatable. Heatable is an online boiler installation company. For instance, check out these fixed priced deals from them for a new top of the range Worcester Bosch:

Use their online boiler sizing guide to find the right boiler for you in under 60 seconds and see fixed prices on screen right infront of you, all including installation. 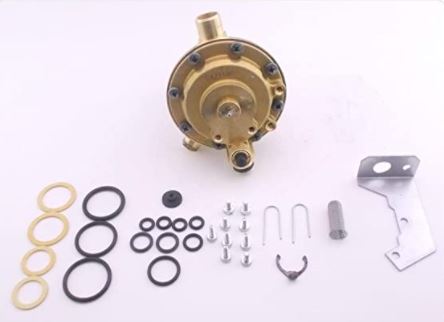 What Does A Diverter Valve Do?

Think of a diverter valve as like the part on a railway track that moves trains from one track to another. It can keep the water moving along one way or close and then divert water along another way.

Then when you stop running the tap it diverts water back to heating the radiators and towel rails.

The diverter valve is a very simple mechanism of opening and closing BUT being a constantly moving part, it can get stuck. It’s very common for a diverter valve in a combi boiler to stick.

Here’s How To Tell If Your Diverter Valve Is Faulty…

1. Lukewarm Water To The Shower & Taps

Probably the most common symptom of a faulty diverter valve is lukewarm water coming from the shower or your taps. Whilst the valve should prioritise the hot water to the taps; what can happen if the valve is stuck, even in a slightly open position, is that hot water to the radiators is being allowed to escape out.

Again another common symptom of what is likely to be an issue with the diverter valve. The value is stuck closed only allowing hot water to pass through to the taps. It will not allow water through to heat the radiators. Thus the outcome is hot water when you run the hot taps but the radiators won’t warm up.

3. Hot Water – but ONLY If The Heating Is On

If you have no hot water, firstly try turning the heating on. Allow it time to warm up and then if you now have hot water or ‘hotter water’ compared to what you had before, you’ll know that this is again another likely sign of a faulty diverter valve.

How To Fix A Diverter Valve

It is never ever advised that you should try and repair your own boiler. Instead call out a Gas Safe engineer.

After all, the only job of a boiler is to heat water, so symptoms of ‘no hot water’ could be traced back to several parts, not just a faulty diverter valve.

What Else Could It Be [Other Symptoms?]

It could be something as simple as a closed valve on some pipework, this is common in new build properties and the fix takes an engineer literally 5 seconds [once diagnosed!]. Another issue could be a fault with the controls, just a sense check that they are operational and working as they should, will form part of the heating engineers assessment.

Fixing or Replacing A Diverter Valve?

If you are going to call out an engineer and they diagnose that the diverter valve is faulty or a high likelihood that it is the valve causing the issue then they will probably just replace it. But actually more common than not, it’s the diaphragm which is causing the issue.  The choice is yours, as the homeowner of course, but as the engineer will tell you it usually doesn’t make sense to just replace the diaphragm. As if you’re going to ‘fork out’ on the call out charge for the heating engineer, it’s best to spend a little bit more and replace the diverter valve in its entirety.  As what you want to avoid is another call out in the near future as now the valve is sticking…bite the bullet and fully replace the diverter valve now.  Whilst the engineer is at your property they will obviously have to strip the boiler down to replace the diverter valve.  This gives you an excellent chance to ask questions like: How does everything else look in there? Could you give a rough estimate of the wear and tear on other major boiler parts? If the feedback is positive then go ahead and get the replacement diverter valve fitted.  If the answer is, ‘‘this looks worn out or that looks a little old now’’ hold fire for just a minute… A new diverter valve is costly to purchase and even more expensive to fit with labour costs. Throwing good money after bad is silly with boilers, for example it makes no economic sense to spend £2,000 repairing a car if the car is worth less than £2,000. The same is true with boilers. If you need a new diverter valve and/or even worse, your boiler is out of warranty, definitely explore the option of getting a new boiler.  At least just get a quick fixed price quote for a new one, as with the deals offered on new boilers [fitted next day!] from cheap online companies like Heatable it’s seriously worth taking a look here.

Costs To Replace A Diverter Valve

Costs to replace a faulty diverter valve: £250-£375. It is both the new replacement part and the labour to remove the faulty diverter and fit a new one [and that’s without running into any unforeseen problems]

Jump onto google and search ‘your boiler brand & diverter valve’ and tons of online heating sites will pop up and you’ll see the costs are anywhere between £85-£200+ depending on the model and year etc. The older your boiler is, or the less popular the brand, generally the higher the costs for parts are.

Rates of Gas Safe engineers will depend on where in the country you are. In London and the South East you can pay double compared to the rest of the UK.  Expect to pay on average somewhere between £40-£100 per hour.  Engineers could charge a call out fee or just absorb it without their hourly rate. But engineers will charge for their time, so if your valve is in an awkward place expect the labour time to be a bit higher.

Diverter Valves: When Is It Not Worth Replacing Them?

There are a few instances when it really might not pay dividends long term to replace your diverter valve. You already have one issue that we know of, the diverter valve. This alone will cost £250-£375, my question is what else could be wrong or go wrong within the near future?  If your boiler is over 8 years old or out of warranty; or if this isn’t the first instance you’ve had to patch up your boiler, you should seriously consider getting a new boiler.  Going with a new boiler will mean up to a 10 year warranty, if installed using someone like these guys. That’s 10 stress and hassle free years!  Plus if you’re upgrading from an old boiler to a new energy efficient ‘A Rated’ boiler the Energy Saving Trust says you’ll save £255 per year on your energy bills alone! So over 10 years the boiler will have more than paid for itself in savings… Be sure to check here for new boiler deals.