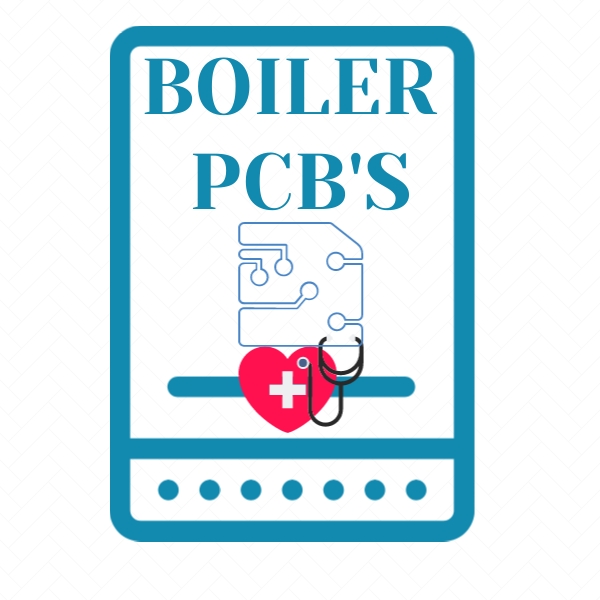 To repair or replace – that is the question.  PCB’S are expensive which is why we have put this guide together to firstly help diagnose faults but then work out if it’s ‘economically viable’ to repair or replace the PCB board or infact if you’re better off with a whole new boiler.

What is a boiler PCB?

The Printed Circuit Board [PCB] is the main circuit board within your boiler which all other electrical components communicate with. In other words it’s the ‘motherboard’, ‘nerve centre’ or ‘control centre’. It is crucial and without it, the boiler wouldnt operate, as all the signals are sent through it to tell certain boiler parts when to turn on or turn off. For example the circuit board will receive a signal from the air pressure switch to say that the fan has started. When the fan is running it then sends a signal through the PCB to tell the ignition that it is safe to light.  When the boiler is operational it then receives messages from various parts and monitors certain temperatures and pressures to ensure the boiler remains safe.  If it receives a signal from a certain boiler part to say there is an issue it can then shut everything down in a safe manner to avoid a potentially dangerous outcome.  Doing such an integral job the PCB has to work hard and faulty PCB boards can mean a number of resulting issues.

Symptoms of a faulty PCB Board

Note: All boilers are inherently dangerous so unless you are a ‘Gas Safe’ engineer you should not be working on any boiler, regardless of whether it’s working or broken.  It is also worth pointing out that although your boiler could show a certain fault code that fault could have been caused by something else. Or not even be a problem in the first place and the issue could be relating to faulty sensors for example.  Another example is an issue when the fan wont turn on. Is that the fault of the fan or the PCB board not telling the fan to turn on? Or both. It could be further ‘up the line’ with an issue from a signal prior to the fan signal.  Diagnostics are not always straightforward and as such can be time consuming for engineers [and therefore costly] – that’s even before labour and parts are factored in to rectify the issue(s). If you think your PCB board is at fault before you spend £300-600 on calling out, diagnosing and then fixing the problem, grab a FIXED price for a new replacement boiler over at HEATABLE.  Heatable do deals on Worcester Bosch, Ideal & Viessmann boilers. If you have 90 seconds fill out their clickable form here and get a fixed on screen price.  We did it and found you could get a Worcester Bosch boiler for under 2k, which is bloody good, [with a 10 year warranty] see below:

#1. Display Panel Not Working [No Power]

A blank screen isnt going to tell you much so if you get an engineer out they will attempt to determine why the display panel has no power. Quite often the PCB is at fault.

The display panel is connected to the PCB, as all electrical signals run through the PCB.

So if your display panels ‘works’ then ‘wont work’ it could be an electrical issue [amongst a host of other things] from the PCB.

Lights on the display either flickering or fault lights, are clear indicators of an issue. Again a faulty electrical signal possibly caused by the PCB Board.

Some boiler models can have lights that flash when they are in service so it’s important to remember this could be ‘normal’.

If this smells electrical it could be the whole PCB board or parts of it have burnt out.

#4. Boiler Will Operate But Intermittently

As the PCB is the ‘command hub’ of the boiler, if one component has failed the PCB might not get a full signal from that part causing it to work intermittently.

Coupled with a PCB board issue this can cause miscommunication between parts, subsequently stopping and starting parts of the boiler and the boiler itself.

Searching the internet for common PCB faults will only get you so far.

At some point you are going to have to decide if it’s worth calling out an engineer and then whether to twist or stick, i.e are you going to repair or replace the boiler?

The PCB board is the most expensive part to replace at circa £500, is it worth sinking that into an old boiler, when online boiler installers like Heatable are doing deals on new boilers with FIXED prices.

You can get a brand new Wocrster Bosch fitted, next day, for well under 2k and they offer finance too.

The ‘kiss of death’ for boilers is a busted PCB, most people deem it beyond economic repair. One of the most common causes of PCB issues is leaks. And it need only be a tiny tiny leak too. Either from a pump or heat exchanger and its game over.

Probably needs no explanation as water and electrics don’t mix but nonetheless what happens is a leak directly on the PCB will cause direct issues but even if there isn’t water directly present on the PCB board, humidity is the next killer.

The humidity build up inside the boiler from a leak will cause corrosion of all the parts on the board and cause it to malfunction.

If an engineer deems that there are leaks in your boiler these will obviously have to be rectified too.

If your boiler has started to vibrate which could only occur on ‘fire up’ or when it switches off, it could have damaged the PCB board.

Continual vibrations can cause the board itself, made only of glass fibre reinforced epoxy resin, to break or crack. Or components on the board to bend, twist or snap.

Once a solder on a circuit board has broken it will never work properly again but could work intermittently, further adding to PCB fault diagnoses nightmare.

The PCB board has everything wired into it given that it is the ‘centre point’ of everything electrical. So something simple like a loose wire can cause a connection issue and subsequent boiler failure.

As previously mentioned boilers now have alot of safety mechanisms in place to prevent things like dangerous build ups where harm could be caused.

So the PCB boards job if a scenario like that arises is to switch off that part until it’s fixed. Nice and simple to fix IF you know that’s the problem.

An example here of PCB wiring issues preventing the boiler from working could be if the wire from the fan to the PCB board is corrupted. The PCB will then not give the instruction to allow gas through to ignite the boiler. No flame means no heat.

So much of a Gas Safe engineer’s role is diagnosis; it can take hours to run through all the different checks then for the majority of the cases to deem that it’s beyond economical repair.

If you’ve seen an error code and diagnosed it using the troubleshooter in the manual and it’s a ‘memory fault’ it’s most likely that your PCB needs to be reconfigured.

This is fairly common with either newly installed boilers or newly installed PCB boards. So if you’ve had your PCB board replaced recently and it’s showing the error code ‘memory fault’ you will need to enter the code to sync the PCB to the boiler.

Find the code in the manual to sync the PCB to the boiler.

Cost To Repair the Boiler PCB

It’s as simple as this: if it is the PCB it’s very rarely economically viable to replace it. Even less so if your boiler is out of warranty.  The labour cost:

Cost to Replace the Boiler PCB

All the costs from above with more! As you now have to order and pay for the replacement then the labour to fit it.  You’re going to end up paying roughly £500 to replace a PCB on a boiler with a Gas Safe engineer.  The only way you could save anything here is if you buy a second hand or refurbished one.  Second hand ones tend to come from used boilers that have had issues with other parts where the PCB ‘could’ be ‘good as new’.  You obviously run a huge risk with all the repair bills and purchase cost, that as it isn’t brand new it could be faulty and obviously will come with no warranty.

Should you replace your boiler if your PCB is broken?

Common sense would dictate there is little point throwing good money after bad. Meaning if your boiler is old but more importantly is out of warranty there isn’t much point spending circa £500 on it.  It’s around £500 and you still have to find an engineer to order the part then comeback to fit it. It means you’re without heat & hot water for a few days. Yikes!

Online boiler installers like Heatable can fit Worcester, Ideal & Viessmann boilers, the next day for a fixed price.  Use their online form and in just a for clicks [and no personal info] you can get an onscreen price in seconds. Try them, we think they are ace.

Are you covered under insurance or a boiler plan?

If you have had the terminal verdict on your PCB from an engineer that came out as you are covered with a boiler plan. Then the good news is you probably haven’t had to pay anything – yet. Phew.  But going through them for a boiler replacement is likely to be seriously more expensive than using a cheaper online installer. Grab a fixed price here so you have something to compare too.